There is a story in Luke’s gospel of a religious leader who requested the help of Jesus. His daughter was seriously unwell and he went to Jesus and begged for his help.

It was busy and many people were jostling and pushing to get close to Jesus. And yet, in all of the bumping together, he noticed one person’s touch, just the touch of the hem of his clothes. This was the forbidden act of a woman who had been unwell for twelve years. She was not allowed to be in contact with anyone and yet, she pushed forward and found a way to touch Jesus so that she could, maybe, be healed.

It worked. She must have been shocked and overjoyed but then, Jesus called everyone to stop and asked, “Who touched me?” Could she stay quiet? Could she get away with not owning up? Did he even mean her? There seemed no escape, she had to step forward. Instead of telling her off though, he praised her for having faith and then said that her healing was granted because of her faith. She could go in peace.

Meanwhile, the synagogue leader was left waiting and we might wonder what he thought about such a little incident holding up the Saviour while travelling to his very sick daughter. The story does have a powerful ending and you can read it in Luke chapter 8 starting at verse 40.

There is a challenge to our over-busy lives. Sometimes the little contacts that we make have extraordinary power for us and for others. We might be busy but an unexpected situation might require us to pause and help someone along even if it means we are delayed. I hope that none of us end up so busy that we cannot take a moment to be human to others, near or far, friend or stranger.

Hear the bells of St Petrock 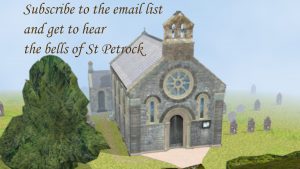 We take it SERIOUSLY here

If you want to know more or discuss any concerns, please contact

or contact the  Diocesan SafeguardingTeam at the link below;

If you are a young person and you feel unhappy about something happening to you, you can call Childline on 0800 11 11.